"The leader of the Tom-Tom Gang, Benito is not terribly smart, but he is quick to get excited and angry."
— Time Factory Worker's Safety Guide, Blinx: The Time Sweeper

Benito is the leader of the Tom-Tom Gang.

Benito is a Caucasian anthropomorphic male pig, most likely taller than the rest of the Tom-Tom Gang. He wears a green cap with a small gold crown on top and "heterochromatic" sunglasses(One glass blue, the other red). His outfit consists of an army green button-up dress shirt with a yellow bow tie and baggy white-and-red pinstriped pants. His gloves are white and his boots are tan.

Benito is somewhat unwise and commonly unreasonable, impatient, greedy, and easy to anger. During the events of Blinx 2: Masters of Time and Space, he falls in love with Mina, the Daughter of Time, whenever she appears in his dreams.

During the events of Blinx: The Time Sweeper, Benito kidnaps a Princess, with whom Blinx falls in love. Blinx chases the Tom-Toms through 8 worlds and finally is close to getting them at Momentopolis, but due to the timeflow disruption, a giant Time Monster made of rock appears and absorbs Benito, Ugo] and Cino. Blinx battles it and restores the timeflow, presumably leaving Benito and his underlings to flee the world.

Blinx 2: Masters of Time and SpaceEdit

In Blinx 2, Benito finds a gigantic crystal called the Big Crystal, but as he touches it, it explodes and the fragments ricochet towards different worlds. Then Benito is contacted in dreams by a mysterious girl called Mina, who implores him to collect the Big Crystal fragments. The Time Sweepers and the Tom Toms battle for the fragments in multiple different worlds, but in the end each faction only has four out of eight fragments. It is then revealed that a Goddess of Time will destroy the World of the Beginning, A-000, therefore destroying the entire universe. The CEO sends a team of Time Sweepers to fight the Scissor Demon, but it turns out to be nearly invincible. However, Benito offers his help and sends a Tom-Tom team to assist the Time Sweepers, sending his team's Big Crystal fragments with them. Using all the fragments, and utilizing a multi-lock on system from the Tom-Toms, the Scissor Demon is destroyed. Mina appears to Benito and he thinks she is going to hug him, but Mina only thanks him and vanishes. Despite everything though, Benito's personality doesn't appear to change, even after receiving a Time Factory medal; he then leads the Tom Tom Gang to steal Time Crystals and treasure in a world called 5J7A, with the Time Sweepers rushing to fight them soon after. 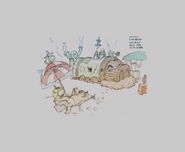 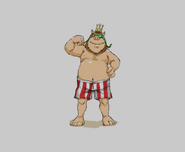 Add a photo to this gallery
Retrieved from "https://blinx.fandom.com/wiki/Benito?oldid=4574"
Community content is available under CC-BY-SA unless otherwise noted.